In the conference room, Janet crumpled the list of topics Maureen had handed her, dropping it into the wastebasket. She circled the table of chattering ladies, refilling the little paper cups with water, and placed the pitcher on the credenza beneath the window overlooking the street below.
The librarians had fashioned scarecrows, dressing them as goblins and witches, and secured them to the light posts, reminding her of the turning season and the way the air had changed in the past couple of weeks, to something with a snap in it, something brittle and crisp.
A time of year that Janet usually found exciting, ushering in Halloween, Thanksgiving, and Christmas, left her uninspired now, now that instead of zipping a warm jacket up the tiny torso of a child she found herself playing substitute nanny to this room full of desperately old women. When, she wondered, would it be time to give up? At what point would she and Mike be mistaken for a child’s grandparents, making them foolish among the back-to-school crowd? In the street below, a tank-like black car, huge as a bus, glided to the curb.

In her office, Maureen palmed the mouthpiece of her phone, whispering a word that would have made her mother turn white with shame.
“I had a thought, Mo,” the mayor said, “Could you run a couple of numbers for me? Replace the street crew with a landscape service and outsource the heavy maintenance to a contractor. Let’s see what we could save…”
This kid, this investment banker who looked like he didn’t yet grow facial hair, continued to meddle in personnel matters. He continued to ignore her recommendations, leading the rest of the council away from her. The town manager stared through the window. On the street, a young woman in ponytail and spandex was leaning in past the open door of her Cadillac Escalade, coaxing a little boy out of the back seat.
Recently Maureen had noticed that the town was full of these young women with small children, further proof of her advancing age. With a kind of mournful longing, she remembered when her own children were small, when she and the women filling the street were the same age. Frightened, she thought: am I too old for this? Should I retire?
“Look up the Robert Frost poem about what the afternoon knows and the morning only suspects,” she scrawled hastily in her opened, paisley- covered notebook, before taking down the mayor’s instructions as he droned on.
In the conference room, Marilyn Samson appeared at Janet’s side, peering down into the street where the little boy now stood on the sidewalk, his chin in his chest, bunched fists tight at his side. His mother crouched before him, whispering in his ear.
“Isn’t it odd,” Marilyn said in a voice so quiet Janet had to strain to hear over the heated on-going hemorrhoidal discussion in the background, “that mothers drive their tiny charges about in those huge transporters?” Marilyn turned her light-filled eyes on Janet.
This, she thought, studying Marilyn’s radiant smile, was the way to be at eighty. Janet had been to the Samson home for a Christmas party last year. She recalled a tiny galley kitchen, its sink filled with dishes, pots and pans, ignored as guests crowded into the living room around a tree sagging beneath its tinsel, listening to Marilyn rumble through Rachmaninoff’s arpeggios on a grand piano, her head bowed over the keyboard, her hands traveling the range of ivory in a furious, passionate race. Bookshelves hugged the walls bearing volumes of Mailer, de Beauvoir, Stein, Hemingway, and not a single, solitary insipid pastel figurine or Chicken Soup for the Soul title.
Growling and screaming broke out on the sidewalk below. The faces of the women at the conference table froze, their mouths sprung open, each sat paralyzed, each imagining her own version of some debacle on the street.
The pit bull from Pine Street had flattened the little boy against the concrete. The mother, on the dog’s back, pried at the animal’s rock-hard shoulders with small, ineffectual hands.
“Minnie, honey,” Marilyn turned away from the window, “someone needs a nurse.”
Minnie swiveled away from the table and stuck her legs out.
“Get my shoes off!” She barked, dragging her skirt hem up jellied thighs, baring the fallen undergarments, “get me outta these!”
Hope scrambled around the end of the table, dropping to her knees, pulling off one shoe, then the other. Janet and Marilyn each took a leg, unpeeling the hose-shrouded panties, sliding both garments over Minnie’s bulky ankles.
Minnie thundered to her feet, down the hall, thumped down the back stairs, and barreled out to the sidewalk where a small crowd had gathered. Two young women pulled at the sobbing mother’s waist, trying to pry her from the animal whose teeth gripped the boy’s tiny arm between the wrist and elbow.
Breaking through the throng, Minnie dropped to the ground and jammed her fist between the animal’s jaws. The boy’s arm was released, and his mother pulled him from beneath the vicious dog. Minnie shoved her arm down the animal’s throat until the pit bull gagged and slunk away, slobbering into a rosebush bordering the sidewalk.

“…and let’s look at negotiating a cap on healthcare at the next go-round with the union,” the Mayor continued.
Maureen, distracted by the tremor of voices in the street below, turned to the window. There was Minnie Rogers, barefoot, on her knees, with her arm halfway down the throat of a pit bull. Maureen dropped the phone and dashed from the room.
On the sidewalk, a police officer collared the dazed animal and pulled him into the backseat of the black-and-white at the curb while a second officer ushered the boy’s mother, the boy in her arms, into the backseat of his vehicle, and sped off beneath frantic flashing lights.
Minnie sprawled on the cement, its chill stinging her thighs, its rough texture scraping her bare behind. Her chest heaved, her face shining with sweat. Hope and Marilyn beamed down at her, then Maureen and Janet appeared, each taking a side, hoisting Minnie to her feet.
Minnie swiveled her head, taking in the faces. There were loving hands on her back, a spatter of applause, a few cat whistles. Was it a dream, she wondered? Her reddened, punctured arm began to throb, her skirt hem lifted and a breeze crept up her legs, chilling her privates. She shook off the hands gripping her arms but both Maureen and Janet continued to stand engulfed in Minnie’s shadow, looking up into that lined face as if seeing it for the first time.
The crowd fragmented, moving off in all directions.
“Shall we finish our lunch?” Marilyn asked, taking Minnie’s hand.
“Hemorrhagic stroke!” Hope, exclaimed, linking arms with Minnie, “that’s what got Frankie!”
“Hope,” Minnie said, moving steadily down the sidewalk to the back door of the town hall, “hemorrhagic stroke doesn’t have ‘oid’ in it.”
“Oh, yeah.”
“Let’s have some biscotti,” Minnie replied. Not as calming as a shot with a beer chaser, but it would have to do. 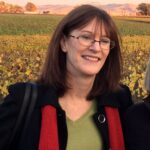 For eleven years, Nancy Smith Harris toiled over mundane tasks assigned in a small-town government office. There, she smiled inwardly, keeping her ears and eyes open, observing comings and goings, small dramas, and tiny, but fierce, politics. She remains forever grateful for that experience because it provided the opportunity to observe a rich cast of characters and their predicaments. When she is not writing stories, Nancy studies the works of writers she admires, including Elizabeth Strout and T. C. Boyle, always striving to inch ever forward in the quest to turn out small fictions. A descendant of Pennsylvania Mennonites, she resides in northern California with her astonishingly good-natured husband, Pete, and their three-quarter pug/one-quarter Boston terrier Poker.