Chronoscope 183: A Rupture of the Winter Sky - John Walser

A rupture of the winter sky:
delicate as crepe paper:

the pulling back of a canvas flap:
the blue that’s not the sky
but the filter that strains it:

and the light like rapture
if someone really could believe
the refraction was god
or souls or leaving behind the wicked:

which I must be:
because here I am.

The shift of snow again:
the welt stencils of melting:
the shadows of trees
thrashing like downed powerlines:
the metallic spark
that can stop lungs
heart, liver, brain.

The swallows are traitors to the sky:
they hide in bushes:
they gather like puddles in the straw
below the neighbors’ feeder:
they’re tucked into nooks, into eaves
like a crown of feathers.

When other birds fly too high
they tear small holes in the sky
perforations like migratory patterns. 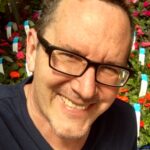 John Walser has a fascination with growing tomatoes, preferring heirlooms with names like those of racehorses or the nicknames of blues artists.  He’s looking forward to planting over two dozen vines this spring.  (Okay, maybe that’s an obsession, but who can argue with just-picked tomatoes sliced and then served with home-grown basil, fresh mozzarella, and some sea salt?)  A professor of English at Marian University, John knows he has a great scam:  he’s paid to yammer at students about subjects he’s passionate about, and they’re forced to listen to him.  A four-time semifinalist for the Neruda Prize, John has had poems appear in numerous journals, including Spillway, Water-Stone Review and december magazine.  His full-length manuscripts — Edgewood Orchard Galleries, 19 Skies and Chronoscopes — are currently being submitted to contests.  John lives in Fond du Lac, Wisconsin, with his girlfriend, Julie, who is his first reader, his best reader, and his love.