Cairo Has What You Need - Ivan Berk 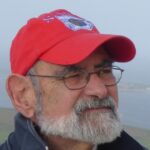 Ivan Berk became interested in photography in his teens. As he worked and traveled around the globe, one of his photo themes became “Ladies in Red.” After retirement he began to use digital cameras when taking classes at New Trier West Extension. His photos have been used as fund-raisers for the Mitchell Museum of the American Indian where he is a docent and the Treasurer. His photos, poetry and prose have appeared in the Lifelong Learning Institute Review at National Louis University. He is the current managing editor of The Review, their annual publication of the arts. He is an engineer and was an institutional investor. He and his wife live in Wilmette, IL, with the rest of the family living within an hour of each other.