It was the kind of night that makes you wonder about ghosts. The wind grumbled through the trees, and leaves swayed in its blustery moans. It was not yet six, but a thick brocade of clouds made it feel pitch black. The ground had had its fill of rain, and water overflowed flower beds and lawns. Mist beaded on the eyelashes and hair of those unlucky enough to be out. Ellen wiped the drizzle from her rimless glasses and swore under her breath. Why hadn’t she taken up Sue on her offer for a ride home?
You always were too stubborn for your own good.
Even after a year, Ellen could still see David’s teasing smile, the corners turned down in mock consternation. She shivered and pulled her raincoat close. The light changed in the reflective puddles that cluttered the sidewalk, and she crossed the street, dragging her right leg. It hurt, but it always bothered her in this weather. Her left leg pulled ahead, but she slowed it to conceal her limp, an old habit. A harsh breeze rattled through a nearby bush, making her jump. She chided herself for being so skittish, but the wailing wind made her think of her dream. She’d been having it more often since David died. In it, she was freckled and pig-tailed, back in the doctor’s office after the accident.
“She’ll have a minor imbalance in her walk once the leg heals. Nothing serious. She’s not going to be a track star, but she’ll be fine.” The doctor laughed. He was an older man with a round face and too much hair. Ellen sat on the exam table, cheeks stinging with shame. Her parents chuckled uneasily. Their laughter mixed with the doctor’s and grew louder until it morphed into the howl of the ambulance. Ellen tried to cover her ears but the noise only intensified. And then she was falling again. Falling, falling, falling forever. Her sister Susan, still on the roof, looked down, her mouth a perfect “O” of surprise.
When the screams started, David would gently shake her awake. Even after thirty years, he still recited the same calming words. You are safe. You are whole. You are here.
“Ellen?” The memory dissolved into Leslie Elliott, umbrella in hand. “Nasty weather we’re having, isn’t it?”
Ellen plastered on a smile. “Yes, hoping to get home before getting soaked,” she tried to sound cheerful.
“Hey, why don’t you come to dinner tonight! Some of the ladies from church are each making a different soup, a sort of potluck.”
At one time Ellen would have relished the invitation, but now she couldn’t muster the effort. Everyone else seemed to know when it was time to put grief away, but no one had bothered to clue her in.
“Sounds lovely, but I don’t think I’ll make it.”
“If you change your mind, be at my place at 7:30!” Leslie called after her.
Ellen shuffled past her friend and tossed a thank you over her shoulder. Now the rain turned sideways and the darkness thickened. There just weren’t enough street lights. Five years ago David started a petition to add more to their neighborhood. It hadn’t gained any traction, but he was undeterred. She’d always loved his confidence. Even at twenty, when they’d met, he’d seemed self-assured and unbothered by others’ opinions. She’d dated before David, but he wasn’t like the others. He never treated her differently because of her leg. Didn’t try to do things for her she was perfectly capable of doing herself. Rather, he brought out a certain strength in her.
Her hair, always pinned in a bun at the nape of her neck, was rapidly coming undone in the wind. Loose strands plastered themselves to her face. Somewhere behind her, a branch snapped. Then another. She quickened her pace and peeked behind her, but her rain-flecked glasses made seeing anything impossible.
Another branch popped behind her, accompanied by a whoosh of wind. Or was it laughter? She scoffed at ghost stories, but the rain now chilled her in more ways than one. Three more quick cracks fanned her fear. Her walk became a shuffling gait. She looked back again and gasped to see a lone figure approaching. With her head turned, she missed the wet branch stretched across the path. Stumbling, she lost her balance and fell sideways into the muddy grass with a slurping thud. Frantically, she whirled around. Standing over her, fear etched across his face, was a teenage boy.
“Are you alright?”
Ellen blinked hard. There was nothing there. Just a kid walking home. And he probably thought he needed to call her an ambulance. Her face reddened.
Another memory of David materialized. A sudden downpour during a picnic had them racing home. She’d slipped in a puddle and was furious about ruining a new dress.
Don’t be upset. People pay thousands for this treatment! He flopped down with her and rubbed glossy mud on his cheeks until she rolled her eyes and pushed herself out of the puddle. He always was a bit ridiculous.
Then the memory was gone. Now, splayed in the muddy grass, Ellen laughed. She laughed at the memory of David sloshing in the mud and the mess they’d made getting home. She laughed at how she’d frightened this poor boy as much as he frightened her. She laughed at her own stubbornness. She laughed until tears streamed down her face and mingled with the rain. She hadn’t laughed in such a long time.
“Um…Ma’am?”
She looked back at the boy and stifled more laughter. “Thank you. I’m fine.”
Relief flooded his features. He nodded and hastily crossed the street. Ellen pushed the curtain of wet hair out of her face. Suddenly, she was starving. She should get cleaned up and head over to Leslie’s. The thought surprised her, but it wasn’t unwelcome, like a long-lost friend come home unexpectedly. 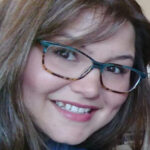 Alexandria Faulkenbury grew up an Army brat and has lived all over the world. Currently, she calls central New York home. She lives with her husband, daughter, and one ornery dog. When the weather cooperates, she likes visiting all the different waterfalls in upstate New York with her family. She teaches English Composition at University of the People and enjoys writing stories in her free time.