They’re always strangers,
these riders,
made stranger
by blurred vision.

Their faces  ̶
thumbprints
on my useless eye. 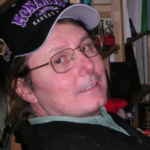 Mark J. Mitchell was born in Chicago and grew up Catholic in southern California. He is fond of baseball, Miles Davis, Kafka and Dante. He lives in San Francisco with his wife, the film maker and documentarian, Joan Juster where he makes his meager living pointing out pretty things.