instant daylight
fills the tent
as the thunder
rattles tree trunks
the campsite
the tiny explosions
of the rainy night
on the roof tarp.
shall we run & hide
in the shield of the car
or lie here silent
in the hand of God? 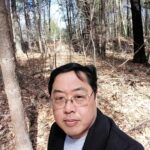 Daryl Muranaka was raised in California and Hawaii.  He received his MFA from Eastern Washington University and spent three years in Fukui, Japan in the JET Program.  He lives in Boston with his family.  In his spare time, he enjoys aikido and tai chi chuan and exploring his children’s dual heritages.  He has written one book of poems, Hanami, and two chapbooks, The Minstrel of Belmont and Leading the Beast Home. At the moment, he would like to perfect braiding bread dough.