The landscape stretches on itself
green specked in fading August.
Last month was the hottest ever
and the tomatoes spill plump from their pots.
Evidence of the senses:
everything is as it should be
here in a long-ago orchard
where a few trees still fruit,
false aphorisms
to persuade anyone that weather
is just peaches free in windfall. 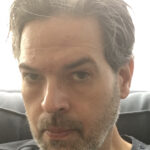 Joseph Helminski was born in Detroit and lives with his wife in Farmington Hills, Michigan. As a child he aspired to become a professional baseball player, but an inability to hit curve balls ended that dream. Then he thought he might become a physician, but aptitude deficits in math and science persuaded him otherwise. So, he became an English major. After attending the University of Michigan as an undergraduate, he attended Wayne State University and received his Ph.D. in English in 2001. He has taught college literature and composition courses for the last twenty-five years. He began writing poetry at fourteen but made little effort to publish until middle age. His work has appeared in print and online journals, most recently in Dunes Review. He enjoys reading, cooking, gardening, canoeing, walking, making bad sketches of his cats, and now that he’s fifty, grumbling on occasion. He would like to visit the barber but is holding out for a vaccine.