She lingers where the screen house may have been
and peers out at the lake, unchanged and still.
There in the August heat, supposing when
she splashed across and back with strength and skill.

Her younger self was supple, smooth and calm,
a sculpted beauty, powerful and trim,
who found the sunshine’s company a balm
and thought the crossing but a pleasant swim.

Though years have not addressed the lake and shore,
the rustic camp thereby has not well fared.
The screen house isn’t present anymore
and a tired fence slopes downward, unrepaired.

The mermaid now departs this hallowed place
but recollects the water’s soft embrace. 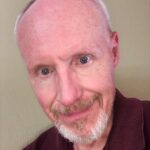 Phil Huffy lives in Rochester, New York, not far from Lake Ontario. He is a father of two, practiced law for many years, and (seriously) stopped eating meat in 1993. He enjoys his collections of vinyl records, pocketknives, and flashlights.  His outdoor interests include hiking, camping, and cycling.

Phil’s poetry life began at the end of 2017, when he composed a short, humorous piece accepted by an online humor magazine. He had pursued a long career doing something else, dabbled in songwriting and home recording, read more books than a lot of folks, and just wanted to give verse a try.

Since getting going as stated, he’s found nearly two hundred placements of  individual pieces and self-published two collections, Rhymal Therapy (limericks with a literary twist) and Magic Words (poetry for clever kids). He often writes with a Maltese on his lap, although that seems to work out better for the dog.