how much darker it seems
in the sun’s late-year slant,
when the shadows advance
like crows going slow motion

crude, plainly seeing
the trees’ far sides back-lit
while the meadow behind them
is still glowing golden,

as if the cold rises
and teeters, then eats
colors for dinner,
to leave just the black bones. 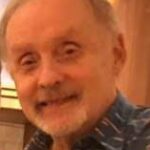 When David Fitch was sixteen, his English teacher said, you can either write an essay or a poem – three pages about no-idea-what or eight lines of something-doesn’t-have-to-make-sense. Simple!

Fifty years and 170,000 lines later, he’s GIVING them away. And WOW! Thirty-five dollars for First Place for the one above in the Poetry Society of Michigan’s 2019 Peninsula Poets, Category: Evening. See? It does pay!  Just divide thirty-five by fifty by 365. Meanwhile, he swallowed his Literary Angst enough to write two dozen short, humorous memoirs published on The Good Men Project.

David is retired from civil service now, in time to take care of four dogs, thirty birds and his husband, with plenty of extraneous paper to line the cages. He also enjoys hanging out with other poets – since March via email – in the Southeast Michigan Poetry Meetup.