“No way you’re seventy-five. I should look half so good at your age,” giggles the young receptionist at the senior center who signs me up for the Wednesday morning yoga class.
The compliment pleases me. After all, for the past many years, I have exercised, watched my diet, dyed my hair, dressed stylishly, and, of course, never left the house without a quick smear of lipstick. Nothing old about me.
Later I am not so smug when, flushed with embarrassment at a lunch with friends, I stutter, “Oh, of course, I know who wrote the book. I loved it. Read it at least three times.”
My friends smile. “Senior moment?” smirks one.
The conversation moves on as I mutter, “Give me a moment. It’ll come to me.” It does, three hours later, when, watching Frozen with my grandchildren, I suddenly blurt out, “Margaret Mitchell. She wrote Gone with the Wind.” The children, totally immersed in the film, do not even turn to look at me.
When I am ready to head home, I can’t find my car keys. “I know I put them in my pocket. I must be losing it.”
“Think backwards, Grandma,” says my ten-year-old granddaughter confidently. “Like what were you doing a minute ago, and then before that, and then before that. And then before that.”
Her method works. I go back in time to the minute I walked into the house, my tote bag slung over one shoulder, a box of Dunkin’ Donuts in my right hand, and the book, which I hoped to finish while the kids watched a movie, in my left. Sure enough, I spy my bag on the kitchen table. No keys inside. The donut box, empty, pokes out of the garbage pail. And the book? There it sits on the table next to the rocking chair. And on the same table – my keys.
A non-judgmental solution comes from a child rather than jibes, although levelled good humoredly by my own peers, at the foibles of the aged. I think back to the morning and my appreciation of the compliment made by the young woman at the senior center, comments in reaction to my lack of traits most often associated with old age – white hair, wrinkled skin, bent posture. Because I negated that stereotypical portrait, she felt comfortable teasing and flattering me. Wonder what she might think now if she saw me frantically trying to remember where I put my keys?
How often have I allowed others, and sometimes myself, to consider those who aren’t members of the sorority/fraternity for the “Still Young in Mind and Body” as fair game for negative ageist stereotyping, while admiring and respecting those who had, genetically in many cases, just lucked out. How much of my own self-esteem is dependent on my being perceived as physically attractive, mentally sharp, healthy, independent and productive?
Look, no one wants to be considered old. Frailty, dementia, illness, dependence and loneliness terrify us. Perhaps that’s what awaits us; perhaps not. No one knows the future. However, we do know the present. In my present, a child sees nothing more unusual in a search for Grandma’s car keys than the half hour she and I spent looking for her misplaced flip-flop.
In my present, I am tired of buying into age stereotyping, both positive and negative. Too many of us abandon our peers because they look or act old. And too many of us direct decisions about our lives to the goal of hearing, “You don’t look your age one bit.”
Once home, with my car keys safely stowed in my bag, I sit down to create a short list. Sort of like New Year’s Day resolutions for the “golden years” ahead.
Stop drawing attention to senior issues. Saying, “Uh-oh, senior moment,” invites age-related stereotyping.
Avoid products, birthday cards and gag gifts that poke fun at older people. Consider that ageist jokes are just as inappropriate as racist or sexist jokes.
Challenge marketers who use fear tactics to emphasize the helplessness of those caught in the “clutches of old age:” the moaning old lady who has fallen down a flight of stairs, the old man who can’t hear his son’s voice. Real concerns for many? Sure. But the ads are so negative and depressing. Let’s demand ads that address seniors as practical, intelligent and savvy. How? With our pocketbooks.
Stop being flattered by “nice” nonsense remarks. This is a tough one. Everyone likes a compliment. But think about it. Feeling good about words that imply that some of us do not appear debilitated enough to qualify as seventy-five-year-olds. What’s good about that?
Lastly, face reality. Seventy-five is not the new fifty. Seventy-five is still seventy-five. Accept it. Embrace it. Live it. 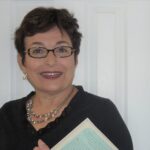 JoAnn DiFranco grew up in New York City, on Manhattan’s east side, within earshot of the roaring lions in the Central Park Zoo, and close enough to the Queensborough Bridge to count the trolley cars from her kitchen window.  Marriage and family took this “city girl” to a Long Island suburb and a career as a high school English teacher — the extension of a childhood filled with stories and storytelling. For years, she spent her days sharing her passion for writing with her students, encouraging them to tell their stories on paper.  Retired now, she devotes time to her own writing, on-hold for far too long.  She is the author of two biographies published by Dillon Press, Mister Rogers – Good Neighbor to America’s Children and Walt Disney – When Dreams Come True.  Her articles have appeared in the on-line publication Better After Fifty and in Long Island’s major newspaper, Newsday.