It is early Spring, and the night is cool. The school buses are parked, and only a few travelers race along the Loop. Walker Woman is alone. She stands by the edge of the road, looking at the Big Dipper as it points to the Spring constellation of Leo. She is tracking the shapes with her eyes, counting the stars, and her lips are moving.
Even though her one-bedroom apartment is half a mile away, high up on the third floor overlooking the walls of the next apartment, she has the strange feeling that where she is right now — this is really home, somehow. Not the couch, as comfortably saggy as it is, or the swift goldfish in the bowl on the kitchen table, or the rabbit-ear TV crackling and fuzzy.  None of it matters. Even her cigarettes don’t matter. She hasn’t touched one since she began her vigil on this Spring night on the black top between the apartment complex and the convenience store, right at the edge of the field that sprouts weeds and grass intermingled.
And she is gazing up until her neck throbs with the agony-stretch, and her eyes are watery as the sky. She is remembering her mother’s words: “Stars are beautiful enough to break your heart.” She feels something in her chest, or maybe it is her throat. A tight squeeze and then a release. There it is, again.
She thinks, I don’t want to die with all the good wishes still inside of me. She lets go of the walker and lifts her hands slowly towards the luminous heavens. She takes short breaths. She smells the fresh-cut grass and dandelions and green weeds. She sees the blazing tail of a comet arcing towards the horizon, effulgent and bright, but to her eyes, hazy and dim.
She exhales. Inhales. Feels the heavy fullness in her chest, rising and falling with every breath. She thinks of her mother and remembers the prayer her mother had taught her, “If I die before I wake, I pray the Lord my soul to take….”
She squints at the brightest star. She wishes that her secret life would last forever. 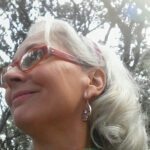 Kira Marie McCullough, for almost four decades, has been writing professionally for various companies. But she considers her greatest achievement to be the three wonderful children that she and her husband have raised together.  For many happy years, Kira was a homeschooling mom with a freelance writing career. Now that her children have grown and flown on the wings of their own dreams, Kira has turned her attention to fiction writing. She started a local writer’s group, Thee Writerly House Fellowship, which offers workshops and critiques. She credits her writerly friends with saving many of her stories from the precipice of the editor’s trashcan. Kira believes in writing fiction that entertains and inspires. Her purpose is to nudge the reader to explore the transcendental virtues of Truth, Goodness, and Beauty. These are the golden threads woven together through even the darkest tapestries, bringing hope and transformation. Find out more here: https://www.kira-marie-mccullough.com/