Barb stands at the kitchen counter looking at them. They look essentially the same. Both have perfectly browned crusts, the juice from the apples bubbling up. Lee’s is much smaller, though. A single serving pie. Over the years, her mother had perfected it. First it was sodium cyclamate, later aspartame. In those first few months, her mother was in the kitchen at all hours, experimenting, baking little pies and cookies, comparing them with the real thing, trying to duplicate the taste. Barb remembers her mother handing her a cookie or piece of cake. “Does it taste real? Can you tell the difference?”
All through dessert, Lee utters the usual compliments. “Mm … mm, this sure is good.” He’s said it from the day Irene discovered the right combinations of artificial sweeteners. And as if scripted, he finishes, stands up and gives Irene a cursory little peck on the top of her head, then disappears upstairs. By the time the table is cleared, Robert is out in the driveway, lying on his back half-way under his car in search of what’s rattling. Barb follows her mother into the kitchen to help with the dishes.
The dish towel in Barb’s hand is another one of Irene’s creations. Barb remembers it from her childhood. A pale blue terry-cloth material with the words Embrace All of Life’s Treasures embroidered on it. Barb can’t believe it’s the same towel. She remembers telling her mother when she was a teenager that it looked too nice to dry dishes with. After a while the blue would fade, the stitching would come loose. Irene said it was like anything else in life. Everything has a timeline, then gets discarded.
With her yellow latex gloves pulled up to her elbows, Irene turns the faucet on to scalding. She seems mesmerized by the dish detergent bubbles as the sink fills up.
Through the kitchen window, Barb looks at her brother’s feet sticking out from under his car. “Is this the same rattle from a few months ago?”
“He’s already taken it to a mechanic, and they can’t find what’s causing it.” Irene carefully slips each plate into the water. They disappear beneath the suds. “He’s just prolonging the inevitable.”
“He should get new one.”
”New isn’t always the answer,” Irene says. The street lights flicker, then burst on. Irene tilts her head towards Lee’s footsteps growing louder as he comes down stairs. “He’s off to check on her house.” She pulls a plate from the suds and swooshes the bristly side of the sponge over it.
From the foyer, “Okay, I’m going to make sure everything is okay at Marsha’s.”
“Why bother?” Barb calls back. “We can see her house from here.”
“Need to turn some lights on, close the blinds,” he says. “You know, make it look like someone is home. Right, honey?” Irene does not respond. “Okay, I’ll be back in ….” The front door shuts before he’s finished his sentence.
He stops at Robert’s feet, now dressed in plaid polyester pants, but wearing the same white starched work shirt. Through the cracked open kitchen window, Barb hears him talking to her brother, asking if he’s found the problem. Lee glances at Irene standing at the sink, lifts his hand to her like he hasn’t forgotten about her and then turns to cross the street.
“Do you ever dream of a different life?” Barb asks. Her question surprises her – the forwardness of it. The implication.
Her mother hands Barb a plate to dry. “No. Why would I?”
“I don’t know,” Barb says. When she was a little girl, her mother used to reminisce about her college days, and then later about her job on Wall Street. She remembers her mother’s tone, the optimism and joy in just starting out, being single, the freedom to make your own decisions and follow your passions. Barb hasn’t heard that tone in years. “No regrets?”
“I have two beautiful children. Why would I have regrets?”
“But what if …”
“Life is full of ‘what ifs,’” Irene interrupts. She appears to be watching Lee as he fumbles with the key to Marsha’s front door. “They’re not always what people end up wanting … or, I should say, needing.” She pauses. “Everyone has to pay in some way or another.” Irene stops washing for a second, wipes a few drops of water from the countertop, then turns and looks out the window again. In a voice softened, as if meant for herself, Irene adds, “Besides, there comes a point when things that were, aren’t, any longer.”
The front hall light in Marsha’s house comes on. Lee appears in the picture window of the study. He walks over to the mini bar, pours himself a drink, then sits down in her brown leather recliner and kicks off his loafers off.
Barb isn’t sure if her mother notices or not. If she knows. If she’s known.
He picks up the powder blue slim-line phone next to the recliner and starts to dial, but then stops, gets up and twists the blinds closed until there are only slivers of light peeking through.
“Here’s the last one,” Irene says as she hands the gold-trimmed plate to Barb. “Oh … and thank you for not saying anything.”
“Saying anything?” Barb dries and then places the plate in the cupboard.
“About the spoon.”
Barb follows her mother over to the dining room slider where Lin-Soo has been scratching for the last few minutes. Irene starts to open it.
“I thought she was an indoor cat,” Barb says.
“What if? What if there’s something wonderful out there to be discovered?” Irene opens the slider, and Lin-Soo steps cautiously over the threshold, her body slinking along the ground. “Okay, there you go, now. Be free!” 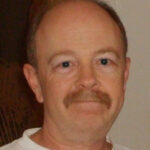 James Krehbiel, a professional musician (violinist), was a member of the Syracuse Symphony, served on the faculty of the School of Music at Syracuse University, received his Bachelors of Music degree and his Performers Certificate from the Eastman School of Music. Nearing retirement, he has discovered writing as another creative outlet and has had work accepted for publication by Through the Gaps, The Writer’s Zine, Down in the Dirt, Fabula Argentea, Scrutiny and others. He is an advocate of the creative arts, enjoys biking, golf and being swept up in a great tale.  He also enjoys spending time bonding with his bloodhound-beagle mix.