Each summer he draws me back
into his muddy world of laterals,
sluice gates and irrigation canals  ̶
what hold on another can anyone have
60 years deep in the grave?

An old-time ditch rider, along he came
each summer’s morning, his pickup
jouncing atop the canal banks,
rakes and shovels clattering in back,
on his mercy missions to parched fields.

Farmers greeted him like an emissary
of the water gods, though in appearance
he was overalled, capped, and as muddied
as those he served  ̶  a chaw of tobacco
and hip waders his only trademarks.

To a child, he towered atop the canals,
sun silhouetting his body, his face
becoming the sun’s, akin
to the man in the moon, mythical
yet grounded, workaday but timeless.

Something more than memory is at play
which calls him up, parades him before me
squelching in his boots, spitting tobacco,
meting out liquid beneficence
to loft skyward broad fields of grain.

I think of Lazarus, as well a common man
who trod again fields of love and loss,
reveling in the dazzle of sunlight  ̶
legacies ascend, irrespective of time,
a homage to life’s purpose and glories. 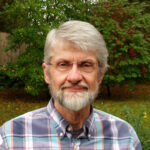