Wag If I Did the Right Thing - Martin Marcus 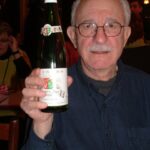 Eventually each of us comes to recognize his or her unique life assignment.  For Marty Marcus it has been to prove that every one of his myriad fears, up to and including death, could somehow be made light of (he even wrote a comic novel about the Great Depression, Hollywood Park).   Influences: Romain Gary (The Dance of Ghengis Cohn), Bruce Jay Friedman (Stern), Hitchcock, Serling.   Marcus has also written some mordant poems, essays and non-fiction books including one in which he admitted to “a heart the size of soda cracker.”  Marcus’s wife/best friend, Sue, who does not have the same sense of humor ‒ although an excellent one nevertheless ‒ may be pleased to see herself noted here along with their four adult children, nine grandchildren and ageless dog, Rupert Jr.  Marty and Sue Marcus live in Northfield, Illinois, a place on the map.